Actor Charlie Hunnam Took Up Boxing and Brazilian Jiu-Jitsu for King Arthur: Legend of the Sword 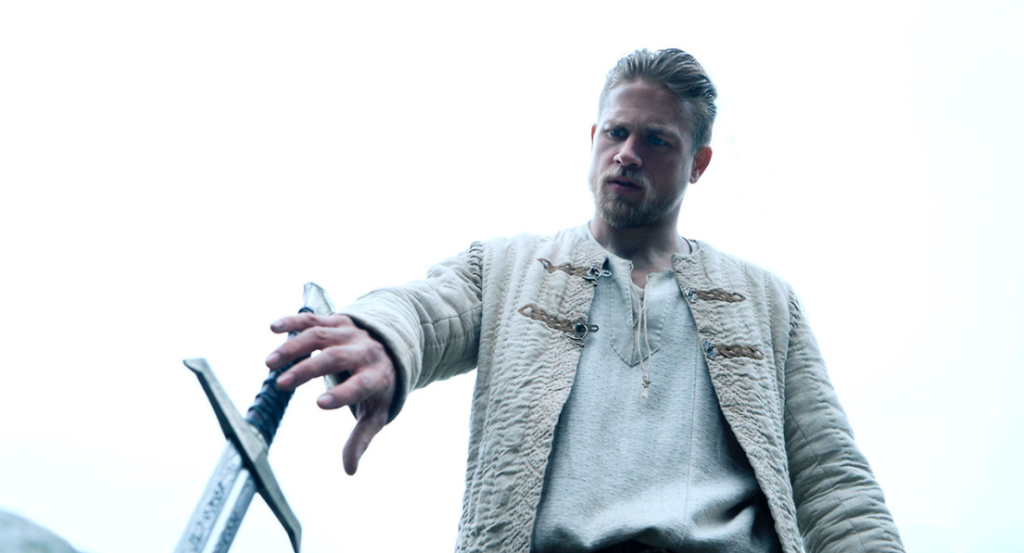 Charlie Hunnam stars in King Arthur: Legend of the Sword

Charlie Hunnam was already a major fight and fitness enthusiast before he began preparing for the title role in Guy Ritchie’s new film, King Arthur: Legend of the Sword. In fact, he offered to quite literally fight the other actors who were auditioning to play the legendary ruler in an effort to impress the director. But actually landing the role, preparing for and shooting the film took his training to a whole other level.

Hunnam, who has been a devoted gym-goer since he started picking up more intensely physical roles like (including his breakthrough turn as Jax Teller in the popular TV series Sons of Anarchy) challenged his already solid physical fitness level in the months leading up to the King Arthur shoot. His pre-film regimen included a mix of strength training and lessons in everything from sword-fighting to boxing. As the official King Arthur Twitter account recently informed us, he threw a thousand punches a day.

There’s a lot that goes into fight training, especially when it involves Charlie Hunnam throwing a THOUSAND punches a day! #KingArthur pic.twitter.com/hOegwKmIro

Here’s a brief clip of the star working the focus pads during that period:

According to a recent profile in Men’s Health, Hunnam gained 20 pounds of muscle while preparing for the film – as well as a significant psychological advantage. “It’s not even as much the physical benefit of training; it’s the mental,” he told the magazine. “When you’re training every day in a combat discipline, it just gives you that eye of the tiger. Then if someone acts aggressively toward you, I can run all the scenarios through my head—you know, like I’m going to step to the side and put an elbow through your face.”

Thanks to Guy Ritchie’s influence, Hunnam also took up Brazilian Jiu-Jitsu while making King Arthur. “I did a film with Guy Ritchie about 18 months ago, who is a black belt in Jiu-Jitsu, so I got into doing a little but of Jiu-Jits with ol’ Ritchie,” Hunnam mentioned during an appearance on The Late Show with James Cordon last month. “He likes to stay active on set and you know, just keep things fun, so we’d have ourselves a little roll around.”

And it seems that Hunnam has been training ever since. He invited Men’s Health writer – and Muay Thai blackbelt – Danielle Bacher to join him for a lesson when she profiled him for the April 2017 issue. His instructor, the legendary 8th degree black belt Rigan Machado praised the actor’s perfectionism and attention to detail during that training session.

As BJJEE.com points out, Rigan Machado is a popular instructor for the Hollywood set, because he’s developed a style of BJJ that allows celebrities to seriously participate in the discipline without the risk of injury that comes with more traditional training. “I created a new jiu jitsu system for people who can’t get hurt. It’s technical training,” Marchado explained to Jiu Jitsu magazine in 2015. “They learn jiu-jitsu and technically train, but it’s all safe. I created a type of jiu-jitsu for the Beverly Hills clientele. Competition, sparring… these guys can’t do that. I can’t even take a 1% chance of them getting hurt. I have 18 celebrities doing this program. Some guys have to sign disclosure agreements; others like Ashton Kutcher and Mickey Rourke come in regularly, while Usher comes in once and a while and Vin Diesel when he’s in town.”

Hunnam has long had an interest in combat. As a child, he would often get into fights to defend himself in the rough neighborhood where he grew up. As he reached adulthood, necessity turned to curiosity as he started to consider proper martial arts lessons. Unfortunately, his work often got in the way of those dreams.

“I was going to go and do a month in Wing Chun kung fu in the Shaolin Temple in China and then I got a movie and couldn’t go because of it,” Hunnam told GQ in 2013. “But I still actually intend to do that, although I’m not sure if I’m going to go to China; I might actually go to Thailand and do a month-long intensive Muay Thai academy.”

Sadly, Hunnam’s plans to train Muay Thai were also thwarted when he dropped out the kickboxing prison thriller A Prayer Before Dawn in 2015.

With BJJ, though, Hunnam seems to have finally found a martial art that fits into his schedule and lifestyle – and maybe even enhances it. “We are supposed to be very active animals. It’s our DNA. Sweating is how I change my oil every day. I just feel happier, more positive, energized, and disciplined if I work out,” he told Men’s Health. “I’m interested in having a high fitness level across the board. Running, swimming, jumping rope, hiking, jiu-jitsu—I try to do it all. I also try to make love as often as I can. That’s an important part of fitness. There’s no reason you can’t be active at 70. I want to run up mountains at that age.”

What do you think of Charlie Hunnam’s skills? Are you excited to see him show them off in King Arthur: Legend of the Sword? Let us know in the comments!

And if you’re looking to add some boxing and BJJ to your training just like he did, be sure to check out our online store for all of your training needs!