Sanshou literally means free fighting. It is part of the traditional wushu curriculum and it is the application of the techniques learned in the forms.

The Chinese government felt that Kung Fu needed a showcase in which to demonstrate it’s fighting capabilities. Out of military training came sanshou.

It’s basically kickboxing. Kicks and punches are allowed, so are throws and sweeps and kick catches. In some tournaments even elbows and knees are allowed. 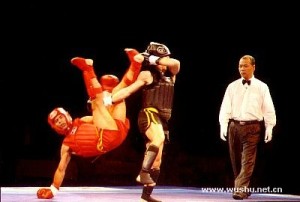 I’ve seen it done on a raised platform, and points are awarded for throwing your opponent off the ring. 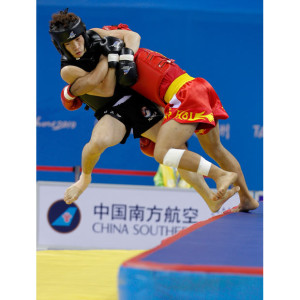 It is a brutal sport with world class fighters. I guess the most famous fighter to come out of the sanshou tradition is Cung Le. 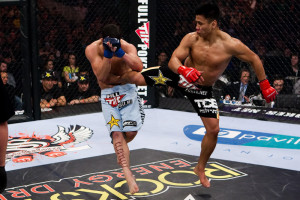 Here’s a video of his highlights while he was competing in K1. You can see him do his famous scissor kick take down several times.

I’ve heard the argument that it’s not really traditional martial arts, that it doesn’t look like kun fu, that it’s just modified kickboxing or karate. I think that’s ridiculous. 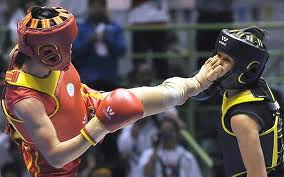 The human body looks a particular way when generating force and all of our bodies are pretty much the same. At least we have the same components. Two legs and two arms. We generate power the same way whether we’re doing karate, kung fu, krav maga or whatever it is we’re doing.

So when you put protective gear on and we go into a ring, we’re all going to look pretty much the same.

Here are some highlights from the 2003 world cup. Enjoy: