Meet The Kung Fu- Practicing Nuns Of The Drukpa Lineage 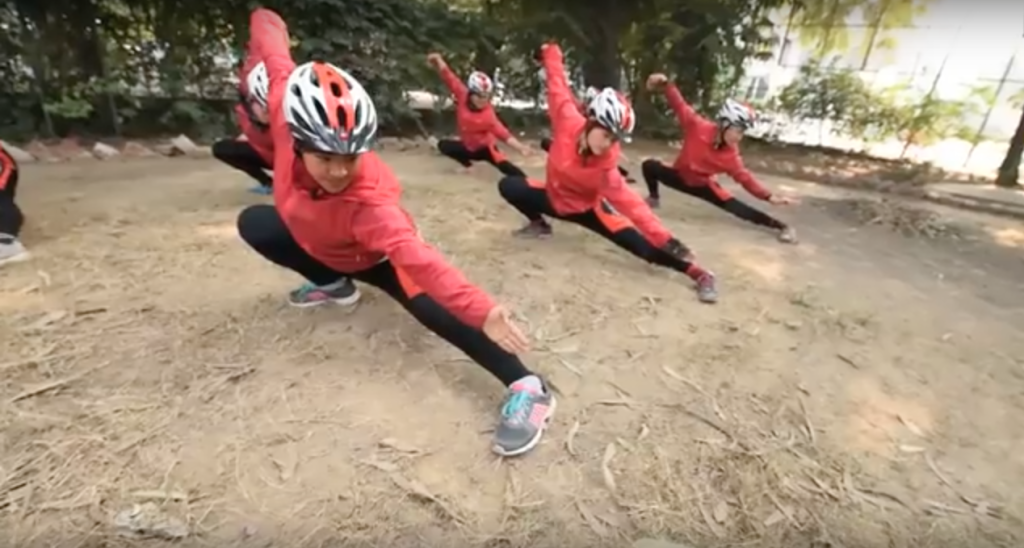 The Drukpa Lineage nuns have become a minor viral sensation over the course of this summer, thanks to their latest pilgrimage, which involved 500 members of their Himalayan Buddhist order cycling across the Himalayas in an effort to raise awareness about human trafficking and women’s rights. And rightfully so. Few things are more intriguing than a band of well trained and highly skilled nuns performing great feats of endurance and physical and mental strength en masse in the name of female empowerment.

Some people have even noticed that their quest sounds a bit like a great action film:

But this “yatra,” or pilgrimage, is just the latest in a series of impressive awareness campaigns, demonstrations, and performances that the Drukpa Lineage nuns have done since they took up Kung Fu in the early days of this millennium.

So let’s take a closer look at these devoted martial artists, why thee first started training, and how their practice influences their lives and work.

Kung Fu nuns, at least of this order, are still a fairly new phenomenon. According to a 2011 report by the Life on the Edge TV program, they were prohibited from practicing the martial art for centuries.

As Carrie Lee, the President of a group of non-profit organizations founded by the order’s leader, His Holiness the Gyalwang Drukpa, explained in a recent profile by The New York Times, the restrictions previously replaced on the nuns was even more extensive than that. “There was a ban on exercise for nuns,” she told NYT reporter Brigit Katz. “They broke that ban. They learned kung fu. It’s instilled a lot of confidence in them.”

Gyalwang Drukpa had some Kung Fu training in his youth. “What I really learned from that experience was that Kung Fu itself needs a lot of concentration,” he mused in segment produced by ESPN Brazil in 2011. “If there’s no sense of concentration, there’s not much a chance to have a true Kung Fu practice.”

When he witnessed a group of nuns receiving combat instruction during a visit to Vietnam, he was inspired to revisit his own training. “When I went to Vietnam, our own nuns over there, they were very much experts on that. They were learning all the time, defending themselves and they were helping other people,” he told ESPN. “And I said ‘Wow. That is good. That is something that I have been dreaming for many, many years so why not?’”

He also encouraged his nuns to being training in an effort to develop their self-defense skills and to help promote gender equality. The nuns officially started their martial arts journey in 2008.

Kung Fu training is now a fundamental part of their life and work as nuns. Many of them are now black belts in the art. “Every day, 350 nuns, aged between 10 and 25, take part in three intense training sessions where they practice the exercises taught to them by their teacher, who visits twice a year from Vietnam,” Swati Jain reports in a recent article for the BBC. “As well as perfecting their postures, they handle traditional weapons, such as the ki am (sword), small dao (sabre), big dao (halberd), tong (lance) and nunchaku (chain attached to two metal bars). Those with exceptional physical and mental strength are taught the brick-breaking technique, made famous in countless martial arts movies, which is only performed on special occasions like His Holiness’ birthday.”

Many of those techniques can be seen in this video of the celebrations from His Holiness’s birthday in 2013:

In addition to their thrice daily training sessions, the nuns also meditate, pray, and and manage the nunnery when they’re at home. “The nuns perform all of the tasks required to maintain the nunnery: some work as plumbers, some as electricians, still others field emails and manage accounts,” the NYT reports. “They can attend business classes and, of course, study Kung Fu.”

Outside of the nunnery, they put their training to good use by helping the community. They’ve been involved in a number of campaigns in support of the environment and empowering other women over the past eight years. And, when a massive earthquake hit their nunnery and its surrounding area in Nepal in 2015, the nuns sprung into action to help provide relief.

“Community duty is also a form of spiritual exercise, and our strong limbs are now tarined to work hard and for long hours,” one nun, Jigme Konchok, told The Washington Post a week after the devastating disaster that killed over 6,800 people.

Another nun, Jigme Yeshi Lhamo told the paper that the philosophy of their Kung Fu training also helped to prepare them for the task. “Kung Fu is not meant to attack people or fight with them. It prepares you for enduring difficult situations, like this earthquake. It is also a form of meditation because it helps us concentrate, keep our minds still and body nimble and light.”

Their latest community outreach program is the yatra where, in addition to spreading their anti-human trafficking and female empowerment messages, they’ve also been providing information and lectures on topics like the environment (and encouraging more people to cycle like them), diversity and tolerance.

And they’ve been conducting Kung Fu demonstrations in their cycling uniforms:

Speaking to The New York Times last month, Yeshe Lhamo said that the order is aware that change takes time, but they’re hopeful that their current actions will continue to contribute to the progress of their community and world for years to come. “Of course, one bicycle yatra cannot change the world overnight,” she said. “But our message of diversity may inspire one person, one little girl, one mother.  Sometimes one person can make a big difference. A mother can change her whole family.  One little girl can do amazing things.”

What do you think of the Kung Fu nuns’ skills? How has your martial arts training inspired you to help others? Let us know in the comments?

And don’t forget to check out our online store for all of your own Kung Fu needs!

AWESOME KUNG FUDrukpa LineageKung FuKung Fu NunsKung Fu Nuns of the Drukpa Lineage
« Previous PostBruce Lee Biopic Birth of the Dragon Premieres At TIFF- And We Saw It! Next Post »A Brief History of Boxing in Arts and Entertainment