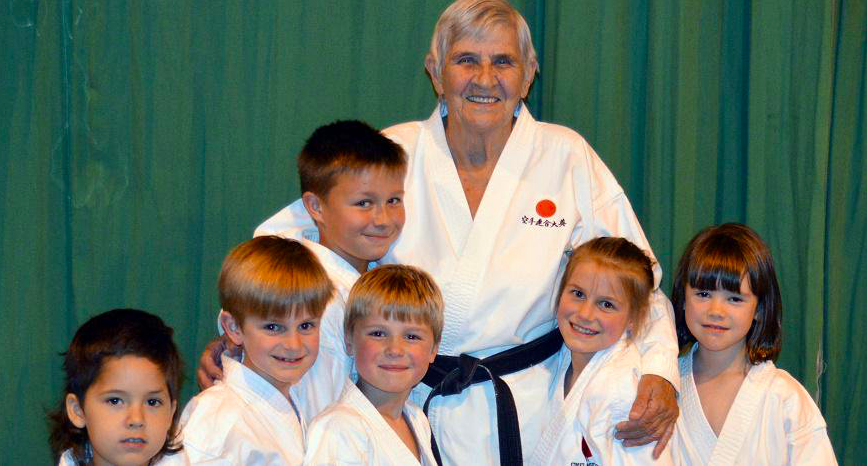 Here at the AWMA blog, we’re very dedicated to the idea of martial arts as a lifelong journey. We love highlighting the ways in which training can benefit people of any age and any skill level. We’ve looked at why and how martial arts are great for kids — and how training can help children and young adults defend themselves and realize their potential in the outside world. We’ve also looked at ways in which martial arts can help combat aging and age-related ailments. And we’ve celebrated martial artists who have continued to train and succeed well into their 90s.

Which brings us to the star of this week’s blog and our new hero: 84 year old Dot Naylor, who has brought her love and lifetime of karate expertise to her care center in Colchester, England.

Naylor, who has dementia and has been a resident of St Fillans Care Centre since last fall, recently made news when her request for the Wishing Washing Line, a community outreach program designed to fulfill the dreams of care residents, was granted earlier this month. Her dream? To watch and judge one last karate display.

Naylor, a 3rd Dan black belt, has been a devoted student of karate for over half a century and was a trailblazer for English women in the discipline. According to her instructor bio at the Chelmsford Shotokan Karate Club, which she co-founded:

Sensei Dot was first introduced to Karate through her husband Charles Naylor (7th Dan) who was a founder member of the BKF Liverpool Dojo in 1961. However, it was following a demonstration in 1965 by Senseis Enoeda, Kanazawa, Kase and Shirai that Sensei Dot was inspired to practice Karate. At that time, there were no women in the Liverpool area training in Shotokan Karate and so, after much persistence, a Ladies class was formed at the Red Triangle Dojo – consisting of Sensei Dot and three other ladies. Sensei Andy Sherry, who at the time had just passed his blackbelt and with the presence of Sensei Enoeda, held her first class.

She took her first grade under Sensei Enoeda on the 12th July 1966. When the other ladies left the club Sensei Dot had no option but to train with the men to continue her path. At that time, culturally there were a few men who felt she should not be there but she persevered and went onto gain blackbelt and last graded to 3rd Dan in 1978

Sensei Dot has had the privilege to train under many great Karate masters including Sensei Nayakama. When she was training at the Red Triangle the two students that stood out for her were Terry O’Neill and Bob Poynton.

As an instructor and mentor, Naylor prided herself on passing on both high technical standards and enthusiasm in her students. She was also passionate about women’s continued presence in karate. On the topic of mothers training, she once said “Some people feel guilty about leaving their kids, family, to go training. But what you have to remember is that you have a life as well. And the kids will be admiring when you get older. You’ll keep a nice figure; you’ll always be alert and fit.”

In 2015, Naylor was awarded a Points of Light Volunteering Award by Prime Minister David Cameron for her 50-plus years of work in the karate community. “I have been fortunate enough to be taught by some of the best Karate masters in the world,” she said of the honor. “I believe everybody should do Karate, it has had a huge, positive impact on my life and I have always been keen to pass on my knowledge and experience to our students.I am proud to receive an award from The Prime Minister for simply doing what I love. It is fantastic.”

She continued to teach at her club until 2017. Even now that she has retired due to health concerns, though, her love of karate — and her desire to share it with new martial artists — has remained strong.

The event wasn’t just a testament to the powers of multi-generational karate training. It was also proof of just how important martial arts can be to our spirits and our long-term health and wellbeing.

As Carol Preston, a general manager at Naylor’s home, told The Clacton Gazette: “This is a lady with dementia, at times her memory loss is quite severe. But here she came alive. At the end all the children were asking her questions and we were thinking she might struggle but her daughter only had to help her a little. It clearly brought it all back. She remembered all the moves and was doing the scoring.”

It was a powerful moment for everyone involved. “We got quite emotional,” Preston said. “It was one of those things when you’re in care homes you have moments when you really connect with someone in the advanced stages of dementia.”

Have you been inspired by a lifelong martial artist? Do you plan to continue training for as long as possible? Let us know in the comments?

And check out our online store. We’ve got the gear that will last as long as you do.