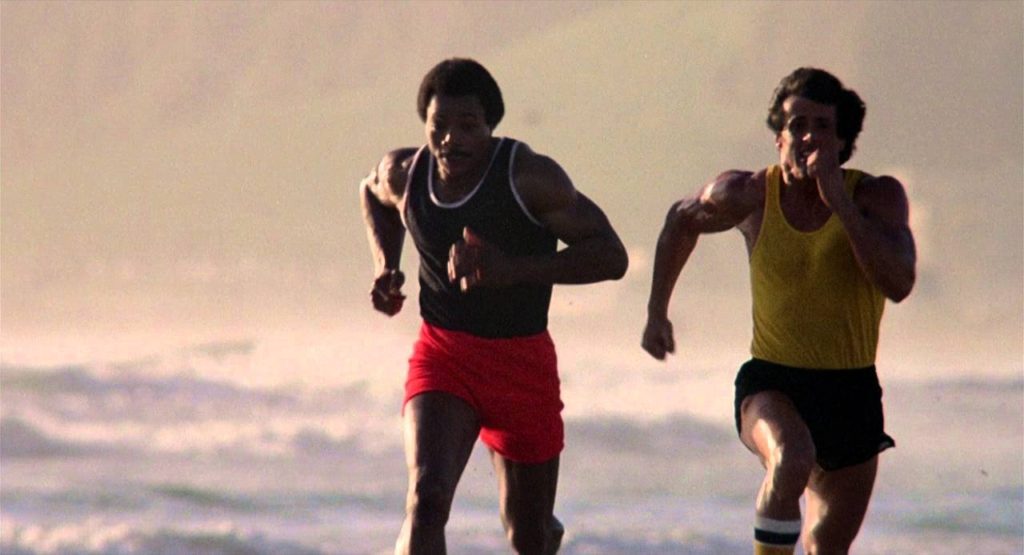 Creed and Rock train together in Rocky III

From Mr. Miyagi in the Karate Kid franchise to Apollo Creed and Rocky teaming up in Rocky III, unlikely coaches, cornermen, and allies have been the foundation of some of the greatest martial arts and combat films of all time. But how well do they work in the real world?

That’s a question that’s been on our minds thanks to the most recent developments in the possible negotiations between boxing legend Floyd Mayweather Jr. and UFC head Dana White.

We still don’t know whether this is a publicity stunt by both parties, or whether Mayweather is serious about signing with the MMA promotion and White is serious about holding a boxing match for the fighter in the UFC, or whether he might actually try his hand at mixed martial arts. But one thing that we do now know for certain is that, if any or all of the above do transpire, current UFC Welterweight Champion Tyron Woodley has plans to work with Mayweather.

“I saw him at the Jordan party during (NBA) All-Star weekend. We started chatting about training MMA and we decided let’s connect, let’s hook up in Vegas and do some training and get him ready for MMA,” Woodley told TMZ last week.

Woodley went on to say that he believes Mayweather’s skill set will translate well to the Octagon. “Floyd Mayweather’s one of the best strikers of all time. How many guys in the UFC that can’t wrestle and can’t grapple that consider themselves a stand-up fighter, but they have to stand across from one of the greatest strikers ever, they are gonna be in a world of smoke.”

As someone who was convinced that Mayweather’s long-anticipated boxing match against UFC star Conor McGregor would never turn into more than a publicity stunt for both parties, this blogger doesn’t feel particularly equipped to speculate what might happen next in this situation. What we can do, however, is look at some of the other unlikely training and moral support situations that have happened in MMA and boxing, and how they worked out for all of the parties involved.

Floyd Mayweather Jr. likes to be around famous people when he fights. The boxer has often invited high profile celebrities like 50 Cent and Lil’ Wayne to join him as he walks out to the ring. Even so, it raised a few eyebrows when Money added a petulant young pop star named Justin Bieber to that illustrious group.

Mayweather and the Biebs first met in 2012 and the former offered to mentor the latter. Over the next couple of years, this mentorship would include multiple ringside appearances, a vacation together, and even some boxing lessons from the champ. In 2017, though, their fighting relationship fractured. Mayweather would no longer address their friendship in interviews and Bieber went so far as to predict that McGregor would defeat his former buddy and coach. By August of that year, Bieber had unfollowed Mayweather on Instagram and Money was calling him a “traitor.” (For a more detailed look at this series of events, see this Complex article on the topic.)

As far as we know, Bieber’s boxing skills have not improved since then.

While having a movement coach in a fighter’s training camp is far more plausible than having a pop star walk out with you, Conor McGregor’s use of the eccentric Ido Portal raised some suspicion — and some outright mockery — as the UFC star rose to fame.

Nate Diaz notoriously dismissed this unique style of training as “playing touch butt with that dork in the park.” But there have also been less trash talk-oriented and more measured critiques of Portal’s methods. Before McGregor’s boxing match against Mayweather, for example, SB Nation wrote a feature that explored the efficacy and the purpose behind McGregor’s use of the movement coach. It’s title? “Conor McGregor’s ‘movement’ training is just another part of the circus.”

Whether it’s all a stunt or not is still a matter of debate. McGregor’s record might be imperfect, but his movement is inarguably effective when he is winning in the cage. Perhaps the next great test will be to see how the master himself fares when it’s his turn, as Portal himself is now training for his professional MMA debut.

There are two schools of thought when it comes to Steven Seagal’s influence on UFC fighters.

The first is that the fading action star and Aikido practitioner’s work with the likes of Anderson Silva, Lyoto Machida, and Daniel Cormier has largely been for fun and that his coaching, such as it is, has had no actual bearing on their skills or performance in the Octagon. This is a theory that is held by most fans, MMA experts, and Anderson Silva and Daniel Cormier.

The second school of thought is that Seagal is an actual Aikido master and MMA genius who taught the aforementioned fighters some of their most famous moves. This is a view that is mostly held by Seagal himself, who went so far as to claim that he taught Anderson Silva the kick that he used to knock out Vitor Belfort at UFC 126. (Silva himself later refuted that claim.)

When former UFC Women’s Bantamweight Champion Ronda Rousey was arguably at the lowest point in her career, an unlikely ally emerged: Cris Cyborg.

After Rousey’s definitive loss to Amanda Nunes at UFC 207, Cyborg’s striking coach, Jason Parillo,  said that he’d like to see the former adversaries work together, despite their past differences.

“They could train together, now,” Parillo said. “Cris could help Ronda improve. I wouldn’t mind seeing Ronda come down and work with Cris a little bit.”

Whether Rousey ever heard about the offer or seriously considered it is unknown. The former UFC star has now signed with the WWE for a run as a professional wrestler and is currently working with another Olympian turned pro wrestler, Kurt Angle, to prepare for her Wrestlemania debut. She’s also said that she’d be interested in working with CM Punk, a former WWE star currently signed with the UFC.

Have you had an unlikely training partner who has helped you improve in your martial arts training? Who’s your favorite unexpected coach? Let us know in the comments!

And check out our online store for all of your training needs, both expected and unexpected.