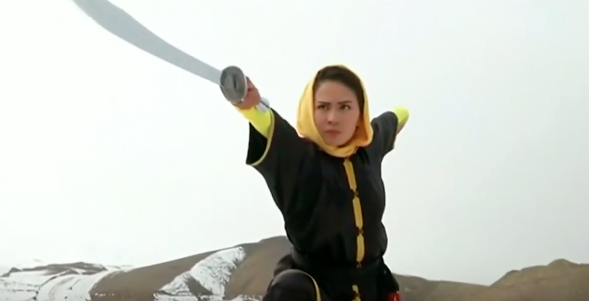 On the peak of a mountain just outside of Kabul, ten young women assemble. With the snow crunching under their feet, they go through their moves, embracing the ancient Chinese art of wushu and preparing for the day that they can represent their country in international competition – and fight a little sexism along the way.

This might sound like the plot of a cool new martial arts movie, but the girls and young women of the Shaolin Wushu club in Kabul, Afghanistan are real. And so is their dream.

Their leader, 20-year-old instructor Sima Azimi, began teaching in the area of Kabul that houses the city’s ethnic Hazara community, about a year ago (when they’re not practicing on mountaintops, they train at a small gym in the area).  Azimi was introduced to the martial art in Iran, where she trained competitively for three years and won a gold and bronze medal. Now that she’s back home, she’s eager to provide the same opportunity to a new generation of female fighters.

“I am working with Afghan girls to strengthen their abilities and I love to see Afghan girls improve the way other girls have improved in the world,” she told Reuters earlier this month. “My ambition is to see my students take part in international matches and win medals for their country.”

Azimi and her students have faced a number of challenges along the way. In a conservative society that still frowns on women training in combat sports, they’ve had to argue for their right to fight at all. “Some of my students’ families had problems accepting their girls studying wushu,” Azimi told The Independent. “But I went to their homes and talked to their parents.”

Finding the right training equipment has also required some creative thinking and resourcefulness. As The Independent reports, Azimi had to order her Shaolin sword from Iran. They had to enlist the help of a local tailor to make their uniforms.

On a snowy mountaintop to the west of Kabul, a group of Afghan girls practise the flowing movements of Wushu. https://t.co/Btk26bCVnT pic.twitter.com/xvvwmo8501

As Reuters reports, sexism is an also an issue, and the members of the Shaolin Wushu club “face regular harassment and abuse” for their training. The very acting of getting to the gym can also be dangerous.  “The biggest challenge we faced is insecurity,” 18-year-old Zahra Timori told the news agency. “Most of the time, we can’t go to the club due to insecurity.”

Azimi agrees that it’s an issue, but she also believes that the training itself is the best way to fight back. “I am concerned about the security of my students because they are developing day by day,” she told Reuters in a video interview.  “As you know, we are living in a country where there is a lot of stupidity going on, there are people who might oppose women improving themselves. But I love to fight against such stupidity and train in wushu.”

Their bravery and hard work is paying off. Azimi’s nine regular students, who pay her $2-$5 a month (depending on what they can afford) for their lessons, have learned important self-defense skills in their time with her. Azimi herself has thwarted a robbery with her martial arts prowess. But the instructor stresses that the mental discipline that they’re receiving is just as vital. “It’s really effective for body and soul,” she explained to Reuters.

And they’re working toward even bigger dreams in the future. One of her students, 20-year-old Raihana Amiri, told The Independent that she hopes to compete in international wushu competitions soon, not just for herself, but also to “bring honor and pride” to her war-torn country.

Although they face many challengers, the Shaolin Wushu club have their supporters, too. One of their biggest fans and allies is Azira’s father, who not only supports her goals but also trains with her. He admits to Reuters that he worries about her safety, but he also says that it’s a joy to see her train her students. “I am really happy that I helped, encouraged and supported Sima.”

Do you have an instructor like Sima who has inspired you? How has martial arts helped to empower you in your own life? Let us know in the comments!

And be sure to check out our online store for all of your kung fu training needs!