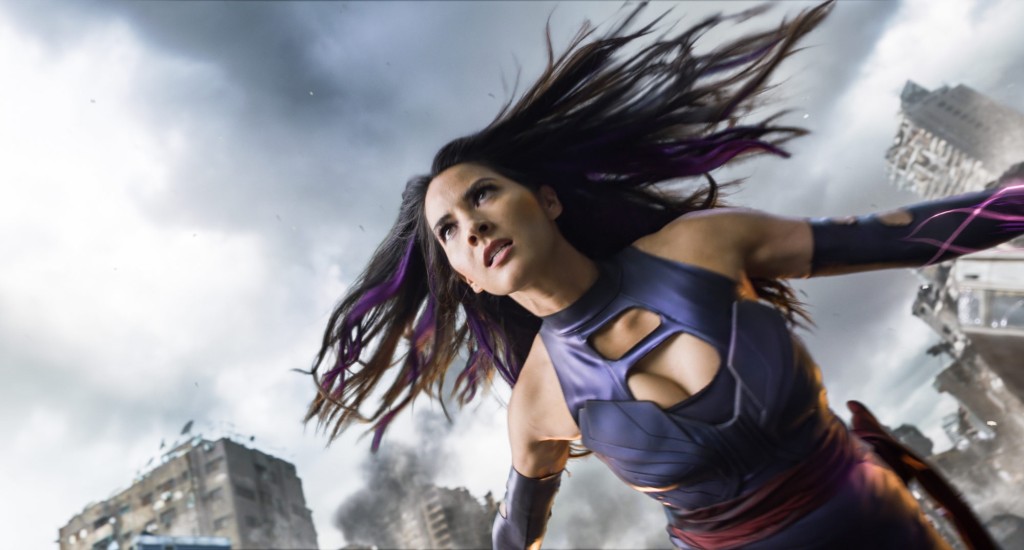 Psylocke and Beast appear to be pretty evenly matched when they come to blows in X-Men: Apocalypse. If you haven’t yet had a chance to check out the latest installment in the X-Men franchise, which hit theaters this past holiday weekend, you can get a brief taste of the action below:

But when it came time to film the climactic battle, the two actors who portray the mutants weren’t quite as equally skilled or prepared.

Olivia Munn, the actress and comedian who plays Psylocke – and did 95% of her own stunts in the process – threw all of her time, effort, and hard-earned skill into the scene. “I knew it was up to me to be able to deliver,” Munn told Entertainment Weekly last week. “So thankfully my fight scene was the last thing we shot. So when I wasn’t on set shooting, I was able to go and train. The producers and [director] Bryan [Singer] and everyone was so supportive. I started training six to seven hours a day from stunts to wire work and martial arts and swords. One thing you can’t cheat is sword work. The more I can do, the more I could learn, the more they had to use and the more options they had for Psylocke. I was lucky that by the time we got to shooting I had been training for so long so that anything they asked I was able to do for the most part.”

Nicholas Hoult, who plays Beast, almost literally didn’t know what hit him when it came time to shoot. “Olivia went to like level-seven ninja,” Hoult joked with the magazine. “And then I kind of rolled up on the day and I was totally under-prepared — I must admit on that. I was so lucky it wasn’t a fight for real or she would have definitely done me in.”

In Hoult’s defense, though, it’s unlikely that he ever could have been prepared enough to face Olivia Munn. In a way, she’d been training for that fight for most of her life.

The second youngest of five sharp and competitive children, the future star started taking karate and sparring with her siblings when she was 5 years old. There was a rule in the Munn household that all of the children had to take lessons in the martial art – and they couldn’t quit until they got their black belt. Munn earned hers when she was 16. “The things that stayed with me the most from that training were the discipline not to give up when something feels too hard and the confidence that comes from knowing that if I keep working hard, I’ll achieve my goal, even if it feels impossible,” she told Good Housekeeping last year.

Although she didn’t pursue regular martial arts training beyond her teen years, Munn did bring that same work ethic and belief in herself to her studies (she graduated from the University of Oklahoma with a major in Journalism and minors in Japanese and Dramatic Arts) and her work as a reporter and a performer. When she landed the role of Psylocke, though, she was able to put both the mental and physical skills that she’d acquired from her karate training to good use. And expand on them.

To prepare for the role, Munn enlisted the instruction of Karine Lemieux and Ken Tran, a married team of martial arts instructors working out of DAX Gym in Montreal, and continued to work with them throughout Apocalypse’s grueling filming schedule. In addition to her time on set, Munn would put in up to six or seven hours at the gym, working on everything from bodyweight exercises to striking techniques with the pair every single day. “If she wasn’t shooting, she was at the gym. No question,” Lemieux told Elle. “I think she was at the gym more than in her apartment.”

Two of those daily hours were dedicated to sword training with Tran. As the 6th Dan Striking and Mixed Martial Arts Instructor explained it to Elle, Munn’s interest went far beyond learning the choreography that she needed to perform for the movie. She wanted to learn about the art as a whole. “That’s the type of person she is. She’s not going to do it superficially. She picks up really fast ands he works really hard, so we went up levels very fast.”

Her boyfriend, Green Bay Packers quarterback Aaron Rogers, got in on the action for a while. He couldn’t quite keep up with her, though.

She also owned Deadpool himself (Ryan Reynolds) for good measure.

Munn lost 12 pounds as a result of her intense physical training and filming regimen – as well as a fruit and vegetable-heavy diet plan – but she stressed that a smaller superhero suit size had never been a goal of hers. “It was never about losing weight,” she wrote in an Instagram post that included before and after photos. “It was about getting fit and healthy and learning new skills.”

#fbf First Day on set to the Last Day. Martial arts and sword training with @karine_lmx @teambillieve was the easiest and most fun way to lose 12 lbs without even trying. *It was never about losing weight, it was about getting fit and healthy and learning new skills.* If you’re in Montreal and want to learn martial arts or just get in shape without having to go to a regular gym (my nightmare) check out DAX Gym in Montreal. Hands down, the best people in Montreal to train with. #daxgym #xmen #xmenapocalypse

Few viewers of  X-Men:Apocalypse – or poor, overwhelmed Nicholas Hoult – would argue that she didn’t do just that.

Have you seen X-Men:Apocalypse yet? What did you think of Olivia Munn’s sword-wielding skills? Let us know in the comments!