When I was learning karate we didn’t spend a lot of time working on flying kicks or spinning kicks. The style that I was studying was Shotokan and you don’t really do a lot of what we used to call “fancy techniques.”

Those were things for the movies only. 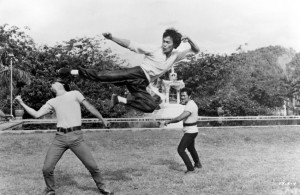 It was actually looked down upon sometimes. What we thought was practical where the techniques that didn’t involve leaving the ground. The fighter was supposed to fight from a stable base and deliver power blows. If you were flying around, it would make it easier for somebody to grab you and throw you down for example.

Of course, later on during the 80’s, flying kicks became super popular thanks to movies like The Karate Kid, where you had the guy at the tournament from the Praying Mantis School who attacked using spinning flying kicks. And of course who can forget Jean Claude Van Dame in Bloodsport, doing a full split while spinning and kicking. 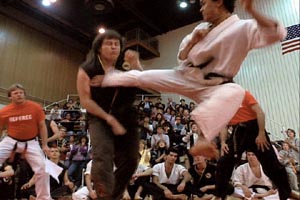 The flying kick can be and incredibly useful and powerful technique when done correctly. It certainly has the element of surprise behind it because the kick comes from and angle that is totally unexpected, especially one of these crescent or tornado kicks. 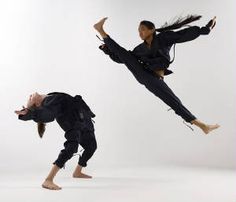 It also carries with it the weight of the entire body, giving it enormous power. I’ve seen a few people get knocked out by spinning fly kicks. It’s a powerful technique and the person being hit usually has no idea what happened.

I’ve been researching the flying spinning kick because I’m involved in the process of development for a martial arts movie that deals with the world of extreme forms and one of my characters performs a tornado kick during a tournament and has trouble learning it during the film.

I found these tutorial videos on Youtube. This guy is pretty great and his explanations are clear and concise. He also gives you some good drills to follow.

Please be careful and do not attempt these techniques without the supervision of your sensei.

Here’s a tutorial for the flying crescent kick:

And here’s one for a variation called the 540 Roundhouse kick:

Let us know what’s your favorite flying technique. Leave us a message on our facebook page.