Ever wonder why some martial arts concentrate only on the throw? This is something I’d always wondered about when I first started in the martial arts.

Don’t they want to know how to hit? I guess they don’t really need to. 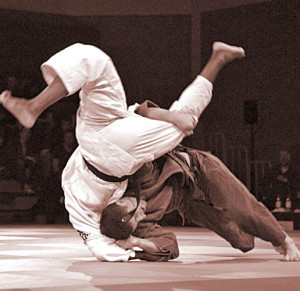 Later in my training I went to study with Tim Cartmell in California. One of Tim’s specialties is the throw – all kinds of throws – wow is he good at it. Tim will toss anybody.

When you get thrown for the first time you realize, a good throw is all you need to really end the fight. 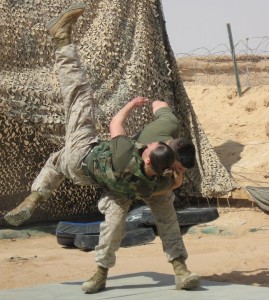 When done right, the impact with the ground is so violent, especially when you’re not expecting it, that there’s no way you can recover. And I’m talking about falling on the mat. Forget about taking that fall on concrete.

So it’s understandable that some martial arts really specialize on this very important aspect of a fight.

Here’s a video showing the proper way to do one of my favorite throws: the shoulder throw.

During a recent seminar with Tim, he told us, he’s only been in three street fights and that two of those were ended with a shoulder throw.

When the throw is done correctly, it is almost effortless. The mechanics of it are what really deliver the surprise. One moment you’re standing  and the next you’re coming face to face with the ground.

And here it is applied to actual combat. It’s one of the few techniques that keep coming up and you can actually count on getting an opportunity to do.

And just in case you think you need a lot of power to do it. Here it is done by somebody on the street, and half the size of the person being thrown.

So learn and master the shoulder throw. It may come up more than you expect.