Ronda Rousey and the Influence of Martial Arts on Professional Wrestling 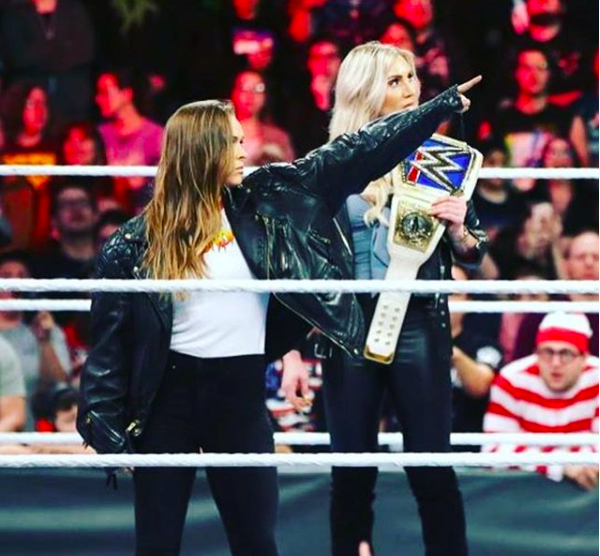 When Ronda Rousey stepped into the ring at the end of the 2018 Royal Rumble on Sunday, January 28, she didn’t just join one of the most impressive rosters in the history of women’s professional wrestling, she also joined a long and storied tradition of martial artists who contributed their “real” skills to the “fake” sport.

The connection between martial arts and professional wrestling might seem ridiculous at first glance. The former involves practical combat for the battlefield, the street, or tournaments. It’s a tradition based on honor and physical and mental discipline. Pro wrestling, on the other hand, is a spectacle-happy form of entertainment that features scripted drama and predetermined matches. Pro wrestling’s fights aren’t so much fake as they are choreographed, though. And, much like other forms of scripted combat, including movie stunt work, it has always taken inspiration for its over-the-top action from arts like karate, jiu-jitsu, boxing, and kickboxing. From basic punches to superkicks to suplexes and judo throws, martial arts’ influence on pro wrestling is wide-ranging and undeniable.

Most pro wrestlers learn the stylized versions of these moves from their pro wrestling education, both in gyms and while working with their colleagues at various shows across the globe. There are many, though, who already had a background in one or more martial arts before they began their careers in the squared circle. Some come to wrestling after briefly considering becoming a competitive athlete in another discipline, like WCW and WWE veteran Yoshihiro Tajiri, who was training to be a kickboxer when his love of watching Mexican wrestling matches prompted him to switch gears.

Others bring a lifelong background in martial arts and combat sports to their wrestling. A number of decorated collegiate and Olympic wrestlers, including NJCAA champ Shelton Benjamin, NCAA champ Brock Lesnar, and Olympic gold medalist Kurt Angle, have turned to sports entertainment as a way to make use of their skills as their amateur careers came to their natural conclusion.  Ernest “The Cat” Miller was world a karate champion and an ISKA kickboxing champ working as a karate instructor when WCW head Eric Bischoff discovered him and convinced him to bring his significant skills to pro wrestling. Robert Alex Szatkowski earned his stage name, Rob Van Dam, as a result of his Jean-Claude Van Damme-like martial arts skills, and his ability to do the splits. RVD has trained in kickboxing, karate, Tae Kwon Do, Aikido, and Kendo.

He was a tough kid but I’d crush him today. 😏

There is also a fair amount of crossover between mixed martial arts and professional wrestling. Maybe it’s because wrestling is, in a sense, the fictional version of MMA in that it’s a sport where a number of influences from other martial arts are combined to create a hybrid fighting style. Or maybe it’s because a number of fighters grew up watching wrestling before they discovered new opportunities like The Ultimate Fighting Championship, pancrase, and PRIDE.

Whatever the case, the boundaries between “real” and “fake” fighting have long been permeable. Former UFC and WWE champ Brock Lesnar has drifted between the two worlds for the bulk of his career. So has WWE, TNA, and Bellator star Bobby Lashley, who currently has a 15-2 win/loss record.  MMA legends Dan Severn and Ken Shamrock enjoyed popular long-term runs in pro wrestling. Longtime MMA fan and beloved pro wrestler CM Punk had somewhat less success when he tried to make a switch in the opposite direction, though. His current MMA record is an infamous 0-1 and the 2 minutes and 14 seconds total that he has spent fighting in the UFC so far have not been the stuff of legend:

Rousey’s background should be an interesting addition to this ongoing history. Not only is she a former UFC champion, she’s also an Olympic bronze medalist in Judo. In addition to the MMA skills that have made her famous, she’s got that arsenal of world class grappling in her back pocket. She’s also a fan of wrestling, so it will be interesting to see how she’s able to adapt her somewhat unique skillset for the WWE. If her brief appearance at Wrestlemania 31 in 2015, where she hip tossed HHH, is any indication, this situation does have a certain amount of potential.

Rousey’s longtime friend, training partner, and fellow member of her pro wrestling-inspired stable called The Four Horsewomen, Shayna Baszler, is currently working in the WWE’s developmental territory, NXT, so there’s also the possibility of some dual MMA-influenced pro wrestling action on the horizon. Here’s a taste of the MMA-style striking and submission holds Baszler is currently bringing to the ring:

Are you excited about Ronda Rousey’s new career in the WWE? What do you think of professional wrestling as a martial arts fan? Let us know in the comments! And check out our online store. Whether you’re training in martial arts for their own sake, or you’re an aspiring pro wrestler, we’ve got all the training gear you’ll need to take the next step in your career.