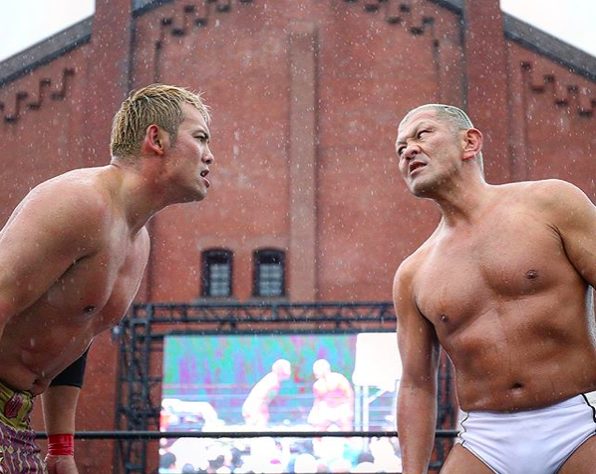 On June 23, 1988, a young man named Minoru Suzuki made his professional wrestling debut against Takayuki Iizuka. It was the start of a storied career that would change — and continues to influence — both pro wrestling and martial arts to this day.

Although he’d just turned 20 mere days before, Suzuki already had a solid — and varied — foundation in martial arts and combat sports when he made his pro wrestling debut. He had a background in kendo and had taken up amateur wrestling while in high school, inspired, in part, by the legendary wrestler, martial artist, and promoter Antonio Inoki. According to the January 15, 2007 edition of the Wrestling Observer Newsletter, he actually faced his future pro wrestling rival, Yuji Nagata, for the first time while competing in a Tokyo high school tournament and the Japanese sectionals in 1986. He won both times.

After high school, Suzuki began training at the New Japan Pro-Wrestling dojo, where he trained under the highly influential “”God of Wrestling,” Karl Gotch.

“Karl Gotch produced great professional wrestlers, but he was also an experienced catch wrestler, spending a good deal of time at the Mecca of catch-as-catch-can, Wigan’s Snake Pit,” MMA analyst Jack Slack wrote in a 2016 breakdown of Suzuki’s shoot fighting prowess for Fightland. “His students—Fujiwara, Antonio Inoki, Masakatsu Funaki, Minoru Suzuki and so on—were taught to put on a show, but also to wrestle properly.”

“The wrestlers learned from Karl Gotch and the old catch as catch can wrestling style,” Gotch student and UFC veteran Ken Shamrock told CBS Sports Online of this NJPW training style in 2007. “The concept was extreme muscular and cardiovascular conditioning and finite technical movement.”

Here’s some footage of that training in action:

Suzuki wrestled in a number of promotions in Japan through the late ‘80s and early ‘90s until a pair of shoot style matches started to open his eyes to a whole different world of possibilities. The first was a shoot style fight with his fellow Gotch student, Masakatsu Funaki. The second was a card at the Tokyo Dome on October 4, 1992. Here’s Dave Meltzer describing that moments and its lasting impact for Yahoo! Sports:

“At a pro wrestling event, a rare legitimate match was booked where Wayne Shamrock, as Ken was known in Japan, faced world kickboxing champion Don Nakaya Nielsen. Shamrock took Nielsen down immediately and submitted him with an ankle lock in 45 seconds. The success of this match made young pro wrestlers Shamrock, Masakatsu Funaki and Minoru Suzuki question what they had been told since breaking into predetermined wrestling: that nobody would ever pay to see real matches.”

Together with Funaki, Suzuki founded Pancrase, a groundbreaking promotion that hosted fights in the style that would eventually evolve into what we now know as mixed martial arts. Here’s Meltzer on their first event, held on September 21, 1993 in Tokyo:

“Shamrock, Funaki and Suzuki spearheaded a group of pro wrestlers and decided to abandon everything people had told them about real matches not being marketable. They formed a promotion called Pancrase, named by ’60s wrestling star Karl Gotch after the sport of Pankration in the ancient Olympics, which combined all different forms of fighting into one sport. Using pro wrestling rules – no closed first punching, breaks on the ropes, but fighting for real – Shamrock beat Funaki via choke in 6:15 in the main event of the first of what was billed as an all-shoot match pro wrestling show. The show drew an enthusiastic sellout crowd of 7,000 fans, who didn’t know what they would be seeing, but when it was over, both the fans and media heavily praised this new form of pro wrestling.”

Suzuki spent the next decade fighting in Pancrase, racking up an MMA record of 30 wins and 19 losses, facing off against mixed martial arts pioneers like Bas Rutten, Frank Shamrock, and Ken Shamrock — and defeating the latter multiple times — until injuries and the general wear and tear of ten years of competitive fighting forced him to shift his focus to promotion and a return to pro wrestling. His last bout for Pancrase was against fellow pro wrestling legend Jushin Thunder Liger on November 30, 2002 at Pancrase Spirit 8. He won via rear-naked choke at 1:48 in the 1st round.

Since then, Suzuki has been freelancing as a pro wrestler with wildly successful stints in All Japan Pro Wrestling, NOAH, and back to New Japan Pro-Wrestling. As one of the most dastardly and captivating heels in modern wrestling, he’s become compelling on both sides of the ropes, menacing NJPW’s beloved Los Ingobernables de Japon stable, beating up the latest generation of New Lions trainees from the NJPW dojo, and putting on some of the greatest matches of all time. A 2012 bout against Ace of the Universe Hiroshi Tanahashi and a 2014 match against current WWE Champion A.J. Styles both earned Match of the Year honors from the Wrestling Observer’s Dave Meltzer.

He also has, arguably, the greatest theme song in the history of wrestling:

While he’s utterly villainous in character, the real life Minoru Suzuki has remained a hero for fighters of both the scripted and shoot variety and their fans, making sure that wrestling, in all its forms remains as inspiring — and accessible — as possible for future generations.

Take for example, The Great Pirate Festival, a two-day event that he held in his hometown of Yokohama this past weekend to celebrate his 30th anniversary in wrestling. Suzuki, who wrestled Kazuchika Okada in the main event (Okada, the greatest wrestler of our time, was born the same year as Suzuki’s debut) took great pains to ensure that the entire festival was free. And his reasoning is everything that you’d expect from a true martial arts hero and role model.

“As soon as you have people pay, you’re putting in a barrier to entry. When plans started to come together for this 30th anniversary, the first thing, the very first thing we discussed and I was firm on, was to make it free, and outside, under a blue sky. And for my opponent, I wanted it to be something that would get worldwide attention, something that wouldn’t be out of place in the Tokyo Dome. If you do that… there are going to be a lot of people watching pro wrestling for the very first time here, and whatever pro wrestling you show someone for their first time, they will feel something, take an impression home with them. So let’s make it the very best thing to show them… Of course, if I’m there it’s going to be the best anyway…

“Maybe some grannies just passing by will be watching, maybe little kids who don’t know what this wrestling thing is. Lately more kids are coming to shows and yelling in the crowd, not all that different to when I was a kid. That atmosphere is starting to come back. I want that to happen!… This is a 30 year celebration, but it isn’t a celebration of me, it’s not something to put me over. I’ve spent 30 years walking out on a stage that other people have busted their asses to build, and now I’m inviting people to come on a stage I’ve built myself.”

So Happy Birthday and Happy Anniversary to Minoru Suzuki. And here’s to many more. Kaze Ni Nare!

Are you a Minoru Suzuki fan? A Prancrase fan? What did you think of The Great Pirate Festival? Let us know in the comments!

And be sure to check out our online store for all of your amateur wrestling and MMA needs!