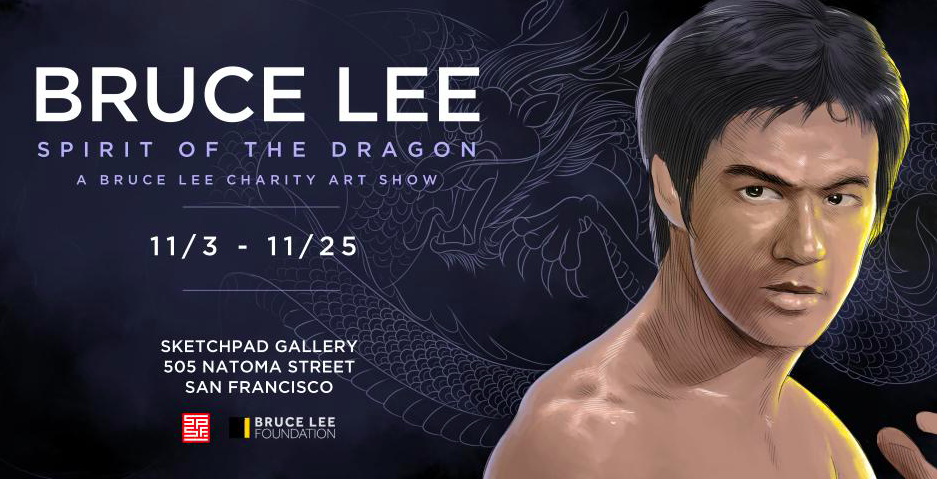 Like most martial arts enthusiasts, we’re obviously big fans of Bruce Lee at AWMA. We frequently write about the legend’s influence on martial arts and his ongoing impact on pop culture, including all of the recent TV and film projects that have been inspired by his life and work. In this particular blog, though, we’d like to take a look at yet another arena in which Lee’s influence can bee seen today: the visual arts.

The Sketchpad Gallery in San Francisco, California is currently hosting a charity art show dedicated to the martial arts and film luminary. Presented in conjunction with the Bruce Lee Foundation, Spirit of the Dragon opened on November 3 and runs until the 25th of this month. According to the gallery’s official website, the show features “local and international artists who have contributed to work from companies such as Marvel Comics, DC, IDW, Lucasfilm, Pixar, Sony” who are showcasing their artistic interpretations of Lee and his teachings. Proceeds from Spirit of the Dragon will go to the Bruce Lee Foundation and will help fund student scholarships and martial arts lessons to at-risk and underprivileged youth. For ticket information, visit Sketchpad’s website, or the show’s Facebook event page.

Here’s some examples of the amazing art that’s currently on display for Spirit of the Dragon:

I painted some Bruces for the BRUCE LEE: SPIRIT OF THE DRAGON @sketchpadgallery in San Francisco. Go see it! pic.twitter.com/bFF5hIICmT

Some process shots of my submission for the Bruce Lee: Spirit of the Dragon Art Show at Sketchpad Gallery in San Francisco. It benefits the Bruce Lee Foundation. I’m super sad I’m missing the opening tonight, but it is an honor to have been invited, and I highly recommend paying a visit. There will be work by @kimjunggius @ftongl @rancidlunchbox @briankistler_art @dawndundundun and many, many more more amazing artists. Someone please gchat me from the opening!!! #sketchpadgallery

Hi guys super stoked to be part of a Bruce Lee Tribute show at #sketchpadgallery with a group of brilliant artists. This is a portion of my submission, if you’re free tonight or one of the coming weekends stop by and see all the great work! #brucelee #flow #artistsoninstagram #rancidlunchbox A post shared by isaac davis (@rancidlunchbox) on Nov 3, 2017 at 7:27pm PDT

If you can’t make it to San Francisco for the show, or if you’re interested in even more Bruce Lee-inspired cultural outings, there are two museums in places that played an important role in Lee’s life that are currently running programs dedicated to him as well.

Also produced in partnership with the Bruce Lee Foundation, Hong Kong Heritage Museum assembled “over 600 invaluable items of Bruce Lee memorabilia from local and overseas collectors” for Bruce Lee：Kung Fu ‧ Art ‧ Life. The exhibit, which opened in July, 2013 and runs until next summer, promises to “look at Bruce Lee not only as a film star and martial artist, but also as a cultural phenomenon from a more comprehensive, in-depth and independent perspective. Visitors will be able to gain greater insight into his achievements and contributions, as well as his significance in popular culture, as the exhibition takes a new angle in presenting the legend of Bruce Lee.” For more information on Kung Fu ‧ Art ‧ Life, see the Hong Kong Heritage Museum’s official site.

In Seattle, the Wing Luke Museum of the Asian Pacific American Experience has been running a series of exhibits in partnership with the Bruce Lee Foundation under the Do You Know Bruce? banner since 2014. According to the museum’s official site“The Do You Know Bruce? exhibition series at the Wing Luke Museum provides fresh and untold perspectives on Bruce Lee’s life and his connection to Seattle. Developed in partnership with Bruce Lee’s wife and daughter and the Bruce Lee Foundation, it is the only interactive exhibition, outside of Hong Kong, about Bruce Lee.  Featuring personal family items and memorabilia, the exhibition series give both an intimate and wide angle approach to detailing his personal philosophy as well as the external influences and circumstances that helped shaped his journey from a young student in Seattle to a global icon who continues to inspire millions.”

The current edition of Do You Know Bruce? will run until next February with an all new exhibit that focuses on Lee’s life in Seattle scheduled to open in March, 2018.

Are you excited about the Bruce Lee-inspired art show? Have you seen any of the Lee museum exhibits? Let us know in the comments!

And if you’re looking to bring a little Bruce Lee to your own martial arts training, be sure to check out our online store for Lee gear and educational materials.