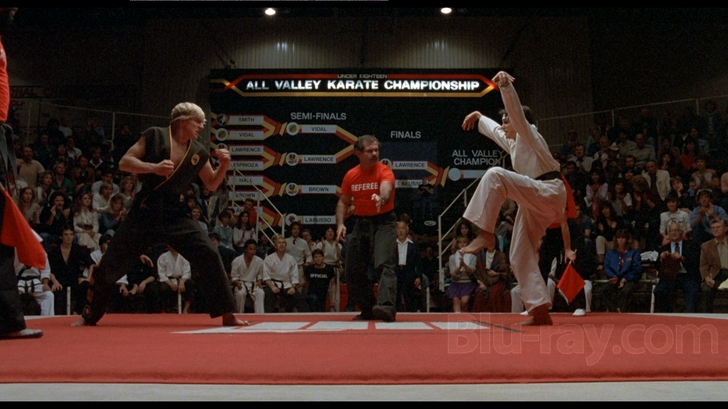 The Karate Kid is returning!

Arguably, The Karate Kid, as a franchise, never truly went anywhere. Since the original film with Ralph Macchio, Pat Morita, and Elisabeth Shue premiered in 1984, there have been two sequels, a “revamp sequel” that saw future Oscar-winner Hilary Swank assume the titular role, and a 2010 remake starring Jaden Smith and Jackie Chan – as well as a video game released in 1987. But the original Karate Kid himself, Daniel LaRusso, is now returning to the fold – and he’ll be facing off against his old foe, Johnny Lawrence, in a brand new series coming soon to computer near you.

Late last week, The Hollywood Reporter broke the story that YouTube Red had ordered a 10-episode series called Cobra Kai which will see Ralph Macchio and William Zabka revisit their original roles as Danny and Johnny. This was a major boon for YouTube’s subscription streaming service, which managed to outbid Netflix, Amazon, Hulu, and AMC for the rights to this highly-anticipated half-hour comedy show. Cobra Kai is set to premiere in 2018.

According to the trade publication, the series will be written and executive produced Jon Hurwitz and Hayden Schlossberg, the team behind Harold and Kumar, and Josh Heald of Hot Tub Time Machine fame. Macchio, Zabka and Will Smith’s production company will also be on board as executive producers. And the premise is intriguing:

“The series […] is set 30 years after the events of the 1984 All Valley Karate Tournament and revolves around a down-and-out Johnny who, seeking redemption, reopens the infamous Cobra Kai dojo,” the Reporter’s Lesley Goldberg writes. “It reignites his rivalry with a now-successful Daniel, who has been struggling to maintain balance in his life without the guidance of his mentor, Mr. Miyagi (the late Pat Morita). The half-hour comedy follows the duo addressing demons from their past and present frustrations — through (what else?) karate.”

In a joint statement, the three showrunners promised that “Like everyone who grew up in the 1980s, the three of us are enormous fans of The Karate Kid. Cobra Kai will be a true continuation of the original films — packed with comedy, heart and thrilling fight scenes. We can’t wait to reignite the LaRusso-Lawrence rivalry.”

So far, the only part of Cobra Kai that doesn’t sound promising is the fact that we have to wait until next year to see it. But don’t worry, we’ve got you covered with a plan to help you pass – and make the best use of – your time until then. Much like Mr. Miyagi helped prepare for the All Valley Karate Tournament, we’ve come up with the following plan to help you get ready for the new Karate Kid series.

Yes. The whole series. Not just the original Karate Kid from 1984, but also The Karate Kid Part II, where Daniel accompanies his sensei back to Okinawa, Japan, The Karate Kid Part III, where Daniel and Miyagi team up against a revenge-seeking John Kreese (Martin Kove). For good measure, why not add The Next Karate Kid, which starred Hilary Swank as Miyagi’s new apprentice, to see how she combined drama and combat skills 11 years before winning the Best Actress Oscar for the boxing film Million Dollar Baby. And don’t forget the recent remake, also called The Karate Kid, that stars Jaden Smith as Dre Parker and martial arts legend Jackie Chan as his mentor. Although there’s no actual karate in the new Karate Kid – Dre and Han actually practice Kung Fu – Kung Fu instructor Tim Prescott, told The Guardian that he believed it was actually a less Hollywood-ised take on the martial arts training journey than the original.

“I did like the film’s positive ethos,” he said. “At one point we see a bad kung fu school, run by a tyrant who teaches students to show no mercy. But Mr Han, rightly, teaches Dre to have respect, both for his mother and for his opponents. In kung fu, you have to have respect: whoever comes through my door has to bow, and I don’t teach thugs. But if, like Dre, you’re being bullied, it’s a good idea to learn kung fu – not so you can punch the bullies, but so you can say: ‘You’re not going to mess with me,’ before it gets physical.”

And we don’t just mean physical shape, but mental shape as well. Why not get in gear to watch the new Karate Kid series by training like a karate kid yourself? Take a class. Prepare for a competition. Do a little “wax on, wax off” on your own schedule. Or maybe brush up on the philosophy behind what Mr. Miyagi was teaching Daniel (and what Mr. Han was teaching Dre). At its heart, the entire Karate Kid universe is about things that we care about very much in the martial arts world, like honor, discipline, humility, and dedication. So what could possible be better for getting in the spirit of things than embracing and embodying those ideals in your own training and hobbies?

For inspiration, here’s a great article on fitness lessons you can learn from The Karate Kid by Nerd Fitness.

If you’re training and getting in the Karate Kid spirit, you could always complete the package by looking the part as well, perhaps with a new karate uniform, karate belts – or even a karate headband, just like Daniel. Whatever your karate (kid) needs, we’ve got you covered in our online store.

Are you a fan of The Karate Kid? Are you excited about the new series? Let us know in the comments!